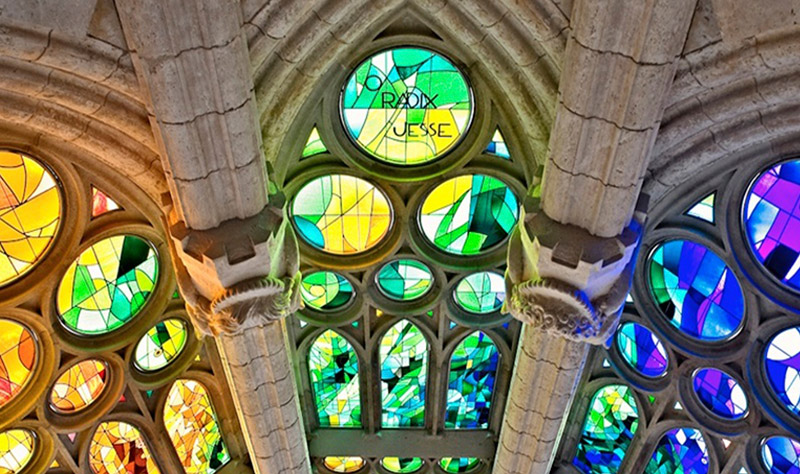 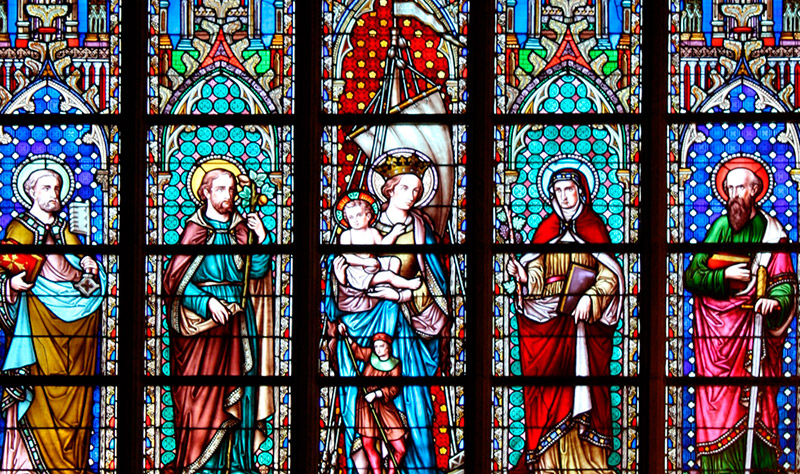 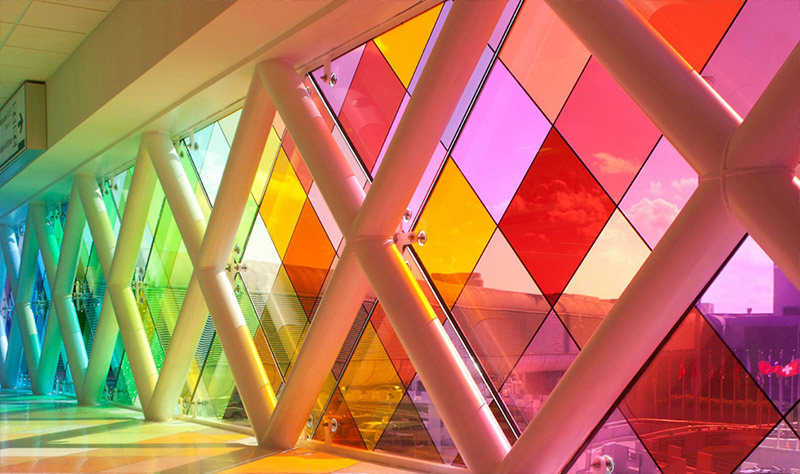 The term stained glass refers to ornamental compositions made up of small pieces of stained glass, arranged regularly or irregularly and tied up together by strips of lead and attached to the window or door frame using metallic rods. Stained glass can also be fitted in the wood used for inner or outer doors. The origins of stained glass are lost in history. The technique was derived from the making of jewelry and mosaic work. Stained glass, as we know it today, most likely appeared along with the construction of churches, the oldest dating back from the tenth century. The stained glass technique, mostly unchanged until today, was described by the monk Teophilus in the year 1100. The Gothic style, with higher and higher churches, but also brighter, made use of stained glass like never before. Monk Abbot Suger from the monastery St Denis rebuilt the church of the monastery, offering one of the first examples of the Gothic style in which stained glass played a defining role. In his diary, which he kept throughout the construction work, he expressed his belief that beautiful things bring man closer to God. In the fifteenth century, when the Gothic style was at its peak, the attitude towards stained glass changed, becoming more a painting element and less an atmosphere generating element. The colors became paler, the figures which were represented often used to cover the entire surface of the window. Painting became more sophisticated, and the new techniques discovered or rediscovered allowed the yellow and golden details to be rendered. The lead ribs accepted until that moment as necessary and ornamental have become a “necessary evil”, hidden as well as possible through the composition of the drawing. The Renaissance has generated a long period of time in which stained glass has only existed as painted glass.

The original symbolism and the techniques have almost been forgotten. During that period of time, painted stained glass became a fashion item in houses, public buildings and churches. The heraldic marks made in that manner, on a translucent/clear background, were very popular at the time. In the eighteenth century, most of the medieval stained glass was replaced with painted glass, and most of the information regarding stained glass began to disappear. The growing interest from the last years has led to the development of new and imaginative forms of this type of art. The new technologies and the growing interest concerning stained glass, as a hobby, have to led to what is known as “a new golden era of glass”. New houses are frequently completed with spectacular glass entrances, bathroom windows with stained glass, Tiffany lamp shades. Ornamental panels are acquired in order to be hung next to a sunny window. Wonderful shapes are used to decorate tables, walls, windows. New artists combine, create and develop unique shapes and styles (geometrical, natural, abstract, classical etc).

Dafermann has 5 halls of storing with a surface reaching a total of 21000 squared meters and 20 transport trucks with diverse capacities, equipped with cranes.

The diversity of our products covers all domains of activity which utilizes the window as a main material.